US Household Net Worth rose to a record $94.8 trillion in Q1 2017. According to the Federal Reserve’s Financial Accounts of the United States (Z1), aggregate paper wealth rose by more than 8% year-over-year mostly as the stock market shook off the effects of “global turmoil.” It was the best rate of expansion since the second quarter of 2014 just prior to this “rising dollar” interruption.

At such a high level, though, the ratio of net worth to spending has skyrocketed. That means the so-called wealth effect doesn’t appear to have any effect whatsoever. In Q1 1995, Household Net Worth was a quaint $27.3 trillion compared to $7.6 trillion in (nominal) Final Sales to Domestic Purchasers. That’s a ratio of $3.60 in “wealth” for every $1 in (nominal) spending. The latest estimates now suggest $4.85 in “wealth” for every $1 in (nominal) spending. 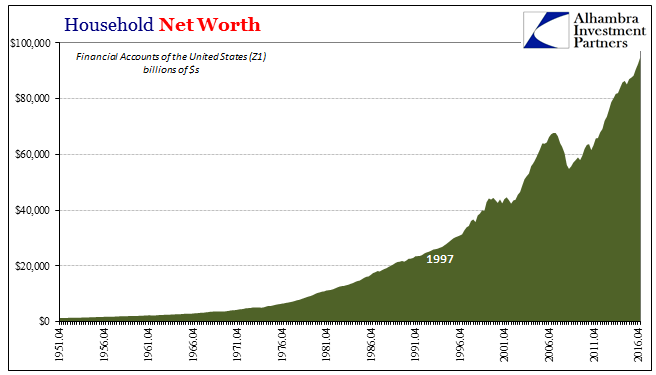 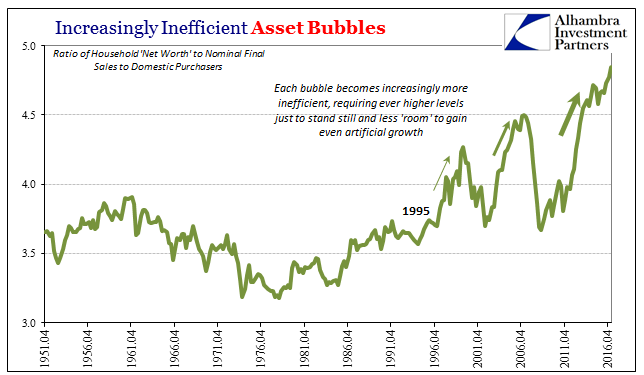 There isn’t even a detectable relationship between growth of net worth and consumer confidence. The theorized channel between asset prices, primarily, and economic growth in boosted “aggregate demand” is through the mood of households. Investors are largely consumers even if clustered toward the upper income strata, so economists believe that higher asset prices increase their confidence so as to loosen their purse strings even if otherwise they might be more cautious about spending....MUCH MORE