The second link below reminded me of this Dec. 23 story from recode:

On average, the restaurant-in-an-app lost money on each meal in 2015.

It has been a challenging year for food-delivery startups. SpoonRocket went out of business. Munchery is struggling. DoorDash and Postmates secured new investments at a lower and flat valuation, respectively.

Maple, the restaurant-in-an-app backed by celebrity chef David Chang, is facing an uphill battle, too.

The New York City-based delivery startup appears to have lost money on average on every meal in 2015, resulting in an operating loss of $9 million for the year on $2.7 million in gross revenue, according to an investor presentation reviewed by Recode.

By March of 2016, Maple began squeaking out a tiny profit of 30 cents per meal — or a gross margin of 2 percent — driven in part by reduced food costs. 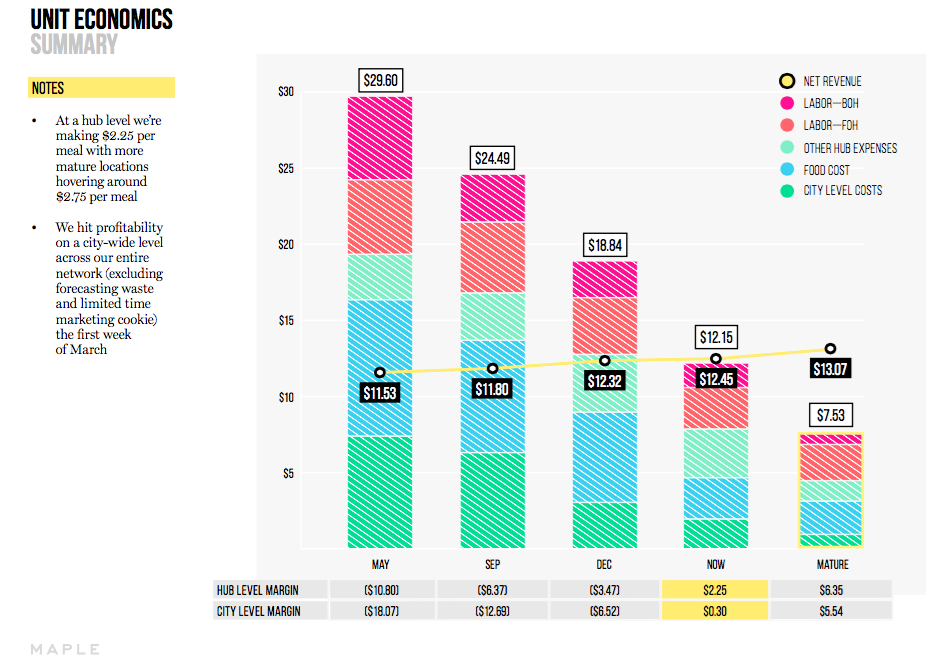 But Maple was still forecasting an operating loss of $16 million for 2016 on revenue of $40 million. Those plans were predicated on expanding its service to other boroughs and to other Northeastern U.S. locations. Currently, though, Maple appeared to still only be servicing Manhattan....MORE

And from Bloomberg yesterday:

Beriker joined Munchery in November, with Tran becoming chief strategy officer. The company announced the reductions to employees Tuesday, said a person familiar with the matter, who declined to be identified because the cuts haven't been made public. The dismissals touched the company's culinary team, research and development staff, photographers and business development employees, the person said.

"It really was not strategic," Beriker said. "Companies are often culling as they focus on different things and for us, it's normal course. It's always hard to see people go." Tran and Chu did not respond to requests to comment.

"As with all journeys, there have been highs and lows, but we went through it together. Our hope is that we all became better for it," Tran wrote in an e-mail to employees obtained by Bloomberg. "You either win or learn, never lose."

Munchery cooks and delivers meals to hundreds of thousands of customers in several U.S. cities. It began delivering food in San Francisco 2010 and has struggled to find a profitable business model. Bloomberg revealed last year that from September 2014 to July 2016, Munchery's San Francisco kitchen made about 653,400 dishes that never got sold. Many dishes went to waste, others were donated to charity. The company lost at least $5 million a month for months and has struggled to bring down its costs....MORE