It's The Middle Of May, So Why Is This Arctic Class LNG Tanker Using The Suez Canal Instead Of The Northern Sea Route?

It's that ice depicted in green at the top right of this Danish Meteorological Institute: map:

Similar to but not as dramatic as what happened last year as well:


June 23, 2018
Something Odd Is Happening In the Arctic: At Midsummer, Tankers Get Trapped In the Ice

Despite sea ice extent continuing to shrink, sea ice thickness in some parts of the Arctic Ocean is increasing.

And the headline story from the Barents Observer, May 13:


The maiden voyage of top ice-class LNG tanker «Nikolay Yevgenov» goes through the Suez Canal and not the Northern Sea Route. Only few vessels in 2018 chose the Arctic shortcut between Asia and Europe.

The «Nikolay Yevgenov» on 21st April set out from the DSME shipyard in South Korea. Few days later, the ice-class Arc7 sailed through the Suez Canal and into the Mediterranean.

The tanker is owned by a consortium of companies Teekay and China LNG Shipments and built for shuttle traffic to and from Russian Arctic LNG terminal of Sabetta. It is the 11th tanker of the kind delivered by the Korean shipyard to the stakeholders in the Yamal LNG project. Like its sister ships, the «Nikolay Yevgenov» is capable of breaking through up to two meter thick ice. But despite its high ice classification, the ship still chose the southern route through the Suez on its way westwards.

As it sails through the warm waters of the Mediterranean, ice still lies thick in Russian Arctic waters. The lion’s share of the Laptev and East Siberian Seas was the first week of May covered by up to 200 cm thick one-year ice. In an area north of the Siberian coast lies a belt of even thicker multi-year old ice. And south of the North Siberian Islands and in the Vilkitsky Strait are solid layers of fast ice, data mapping by the Russian Arctic and Antarctic Research Institute shows.

Despite major melting over the past years, spring ice on the eastern part of the Northern Sea Route remains almost impossible to break through.  That is reflected in shipping figures in the area....

Over the last two-three years we've had a half-dozen posts comparing the Northern Sea Route with the Suez Canal Route. Here's one from September 2018: 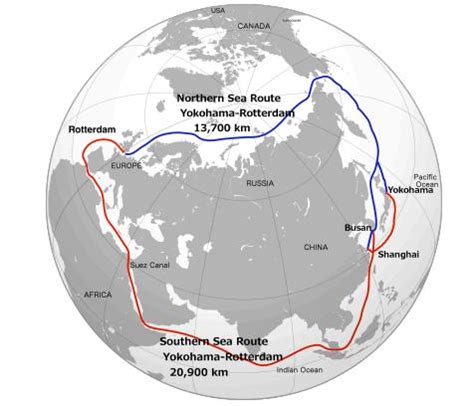 Following on this morning's post, "Shipping: Venta Maersk Successfully Transits Russia's Northern Sea Route Becoming The First Container Ship To Do So", here's a story we've been waiting to link, from Egypt Today:


CAIRO – 29 August 2018: Although Maersk will be sending its Venta Maersk vessel to collect data from the Arctic sea route in the next few days, research has shown that the Suez Canal Route is more cost effective and will remain unaffected....

Shipping/LNG: "Novatek Wants Arctic Sea Route Open Year Round"
That may be a tall order over the next few years.
Despite the return of the troubling thin ice in the Bering and Chukchi seas—top center in this DMI map:...

***
... the overall ice sheet is still recovering from the lows earlier this decade, see after the jump.
(we use volume rather than extent as a better measure of what the weather and melt physics are acting upon)...MUCH MORE
climateer at 8:07 PM
Share
‹
›
Home
View web version